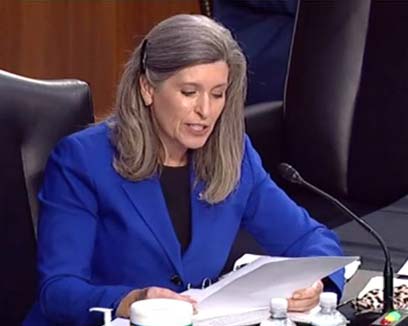 GRISWOLD — U.S. Senator Joni Ernst is responding to critics who question whether there are safety concerns about refugees being flown from Afghanistan to the United States. Ernst, a Republican, has been an outspoken supporter of resettling Afghans in Iowa.

“There is a significant vetting process that they have to go through even before they’re brought to the United States of America,” Ernst said.

Ernst, a combat veteran, was at Fort Lee in Virginia early this month to visit with Afghan civilians with Special Immigrant Visas. During a forum Tuesday in Griswold, Ernst was quizzed about Afghans who would be resettled in Iowa. Ernst said all would go through the State Department’s Special Immigrant Visa process.

“Those would have to be the ones that worked for our Embassy in Afghanistan or those that worked for a government contractor, served as an interpreter — those that go through the vetting process,” Ernst said. “And, again, they are supposed to be vetted before they ever touch down on U.S. soil.”

The Special Immigrant Visa program started in 2009. Applicants must provide a letter of recommendation and proof they were employed to support U.S. government activities in Afghanistan. Refugees with these visas are now being flown to other countries before their arrival in the United States. According to the Department of Defense, they’re undergoing biometric screening, which means checking palm or fingerprints or using facial recognition software to confirm the person’s identity.