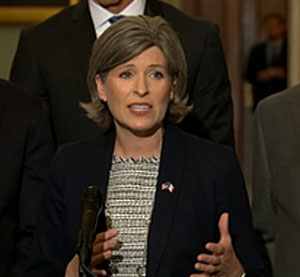 WASHINGTON — During her 99-county tour of the state, U-S Senator Joni Ernst says she’s frequently hearing from Iowans during town hall meetings about relentless robocalls trying to dupe us out of our money.

Ernst says new legislation is taking shape which aims to turn the tables on the annoying, illegal calls. “The current law doesn’t do nearly enough to deal with scammers who are intentionally and aggressively breaking telemarketing rules.”

The Republican from Red Oak says she’s signed on as a co-sponsor of the Telephone Robocall Abuse Criminal Enforcement and Deterrence Act. “The TRACED Act gives regulators much more authority in going after robocall scam artists,” Ernst says, “including charging penalties of up to $10,000 per call for bad actors who intentionally break the law.”

One element of the bill would mandate that our phone service providers use call authentication technology which would shut down robocalls before they can even ring our numbers. It would also bring several federal agencies together in an effort to track and prosecute robocallers, including the F-C-C and the Departments of Justice and Homeland Security. “This bipartisan bill, which now has 69 Democratic and Republican co-sponsors in the Senate, will help us better enforce the rules on the books to crack down on intrusive and illegal robocalls from predatory scammers,” Ernst says.

A new study finds more than five-BILLION robocalls were made nationwide just in the past month.