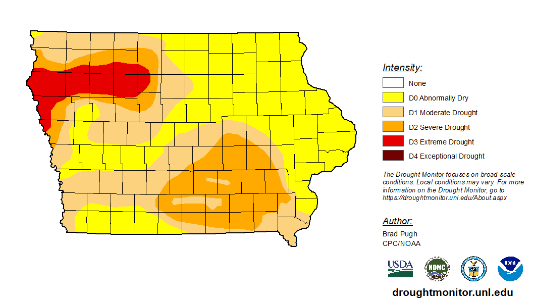 AMES — The Iowa Drought Monitor now rates the entire state as either abnormally dry or in some level of drought. At this time last year, three-fourths of the state was abnormally dry. Dennis Todey, director of the Midwest Climate Hub in Ames, says relief isn’t likely any time soon.

“We are entering a climatologically drier time of year,” he says, “so we don’t expect as much rainfall overall anyway.”

Extreme drought conditions are expanding in northwest Iowa, with a sliver of Woodbury County rated in exceptional drought – the most severe classification. More than half of the state is classified under moderate drought. Todey says that these conditions come with fire risks.

“We’re dry enough that people do have to be careful with their combines or in fields or dry grasses about fires that get kicked off,” Todey says.

The National Weather Service has issued a red flag warning for portions of western and central Iowa. Officials say any fires that develop will spread rapidly. It’s been nine years since drought conditions were this severe in Iowa.