End of an era: final chuckwagon races held in Spencer 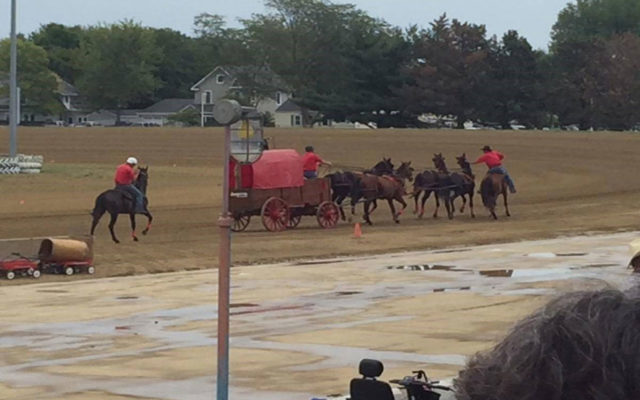 SPENCER — The final chuckwagon race was held at the Clay County Fair Sunday at high noon.

Race announcer Rich Greenlee says three of the six wagon owners who raced yesterday in Spencer are retiring. “Three wagons for a race would be pretty boring,” Greenlee says. “so they decided to call it quits.”

Horse-drawn chuckwagons were essentially mobile kitchens in the frontier, carrying food to cowboys herding livestock. In 1923, chuckwagons races were held for the first time at the Calgary Stampede. They’ve been a part of Clay County Fair entertainment for decades.

“It’s hard to explain to somebody what all it is until you actually see it in person,” Greenlee says. “I started racing here in 1970 and it was always a big deal for everybody to come to Spencer, Iowa, to the fair to watch the chuckwagon races and it’s just grown and grown and grown over the years and this is our last time ever.”

According to the Chuckwagon Racers of Iowa and Minnesota website, there were chuckwagon races earlier this summer at county fairs in Sac City, Central City, Denison and Nashua.