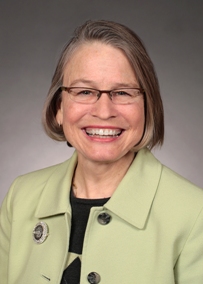 DES MOINES — As the Iowa Senate began its session this morning, one senator asked to speak to her colleagues. Senator Mariannette Miller-Meeks of Ottumwa grew emotional as she explained why she supports automatically restoring voting rights to felons who’ve been released from prison.

“I think Michael would want me to share this story although we rarely talked about it in public to other people,” Miller-Meeks said. “I never wanted to embarrass my brother who was otherwise a good person and I know that from the letters that came from his death.”

Her brother was accused of stealing a thousand dollars from another Marine and was convicted of a felony. He served a year in the military prison at Fort Leavenworth.

“He wouldn’t allow us to defend him…We didn’t know what the circumstances were or what to believe,” Miller-Meeks said. “His commander had offered him an Article 15 which would have meant losing some stripes paying a financial penalty and making restitution — we did pay the restitution — but Michael refused all of that.”

The senator’s brother served 21 years in the military and died in November of 2017 at the age of 66.

“Michael never had his military funeral with honors. He never had his military pension that he earned, but he had one eight-year-old girl who he took to her eighth birthday to the Beatles ‘A Hard Day’s Night’ who still thought of him as a hero,” Miller-Meeks said. “…And so when you ask me why I supported voting rights for felons, it’s because of Michael.”

Miller-Meeks made her comments less than three hours before 11 of her Republican colleagues will gather in the Senate Judiciary Committee to vote on the governor’s proposed constitutional amendment that would automatically restore voting rights to felons who’ve been released from prison.

“I don’t know why these thoughts came to me this morning, but I feel that I’m guided to share them with you,” Miller-Meeks said. “Everyone has a Michael in their family or to whom they know. Michael never had another conviction, not even a speeding ticket, the rest of his life…so I don’t know if this story moves you or helps you, but there are good people out there who do bad things…make mistakes, when they are younger.”

Miller-Meeks ended her brief speech by asking her fellow senators to think of her brother Michael when they consider how to vote on this issue.