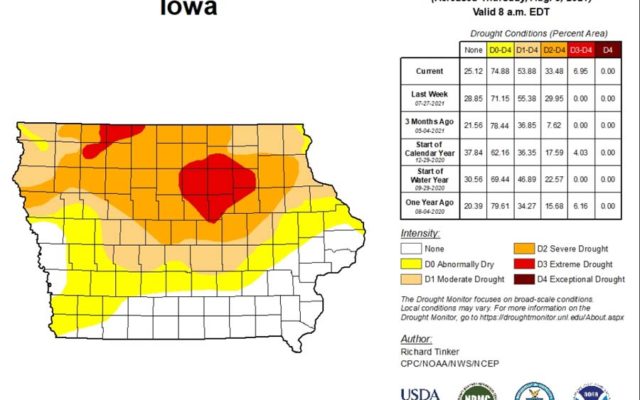 DES MOINES — Updated national maps now show there are two areas of extreme drought in Iowa, including one area that covers a portion of our listening area.

The state climatologist says the areas in northwest and east central Iowa have missed out on widespread heavier rains. According to the National Drought Mitigation Center, which produces the maps, conditions deteriorated significantly in several large patches in Iowa and Minnesota over the past week.

Most of these areas have had up to six inches less than normal rainfall during the past 60 days and up to eight-and-a-half inches short of normal since early May.

All of Butler and Franklin Counties are now classified as in extreme drought, along with adjacent areas in far southern Cerro Gordo and southern Floyd counties in our listening area. That area also includes portions of Grundy, Hardin, Bremer and Black Hawk Counties. In northwest Iowa, the extreme drought zone includes  far northwestern Kossuth as well as portions of Dickinson, Emmett, and Clay Counties.