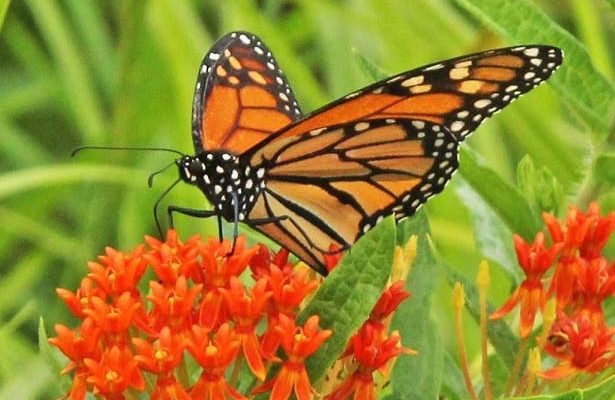 AMES — Iowans are steadily promising to devote their farmland, roadsides and even urban properties to habitat for monarch butterflies.

A 20-year program which Iowa State University launched five years ago is reporting significant progress, with 430,000d acres of land already set aside. Nicole Shimp is a program specialist with ISU’s Iowa Monarch Conservation Consortium which is releasing its Monarch Conservation Effort Report.

“We are just a little bit over 50% of our way to our low-end goal of establishing habitat here in Iowa by 2038,” Shimp says. “So that is really exciting news and proves that Iowa is really helping out the monarchs.” Iowa and other Midwestern states provide a summer breeding ground for the butterflies and almost 40% of the overwintering monarchs in Mexico came through Iowa. Shimp says efforts in Iowa to preserve habitat may already be paying dividends.

“This last winter we counted the monarch population and it actually held steady,” Shimp says, “compared to last year where it had dropped off.” Studies over the past two decades show the global monarch population has dropped 80-percent. The goal of the ISU program is to establish 790-thousand habitat acres statewide in the next 25 years, which Shimp says is very attainable.

“There’s a lot of great programs out there to help people that are thinking about putting in habitat,” Shimp says, “and so I have high hopes.” One of the program’s biggest gains is in acres of farmland. She’s hoping more and more Iowans will make the commitment to set up monarch habitat and register with the program.

“We have this app that can help people let us know about it and it really helps us,” Shimp says. “It’s as easy as just putting some pins on a Google map and then just filling out a few other details and then that’s all we ask of you.” That free app is called HabiTally. The Monarch Conservation Effort Report is online and shows habitat establishment in all 99 Iowa counties.