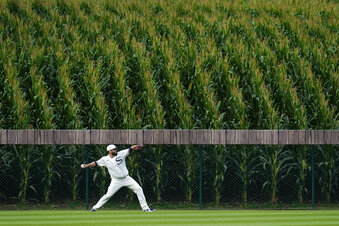 Chicago White Sox pitcher Lance Lynn warms up in the outfield before a baseball game against the New York Yankees, Thursday, Aug. 12, 2021 in Dyersville, Iowa. The Yankees and White Sox are playing at a temporary stadium in the middle of a cornfield at the Field of Dreams movie site, the first Major League Baseball game held in Iowa. (AP Photo/Charlie Neibergall)

DYERSVILLE — It’s been confirmed the Chicago Cubs will play the Cinncinati Reds next August in the second Field of Dreams Major League baseball game in northeast Iowa.

Dyersville Chamber of Commerce executive director, Karla Thompson, says they are pleased that everything went well in the first game. The event drew praise from across the country.

“What’s really heartfelt is the people who have move away, or maybe they live in another state and they keep saying ‘Iowa proud, I’m proud to be an Iowan, I’m proud to be a Dyservillian,’ that’s my hometown type of thing,” Thompson says. “That really makes you feel good.”

And now they are at work preparing for the next game. “We are so excited, we are receiving calls right now as we speak ‘where do I get tickets, whose going to be playing,’ we are getting all sorts of calls on that. We can just feel the anticipation and excitement building,” she says. With all the publicity the game received on social media and through the national broadcast it’s was anticipated that tourist traffic in Dyersville and the Field of Dreams movie site would pick up.

Thompson says the impact didn’t take long to kick in. “Actually, we are seeing it right away, and we even saw it probably a couple of months prior to the event, those people wanting to come and see it beforehand because they weren’t able to make it to the event, Thompson says. “I think we are going to see an increase in retail sales, tourism, and even development.”

Thompson says they are using what they learned from the game and the events surrounding it to look at things that need to be improved. “We’re taking peoples comments and suggestions on how to just make things flow a little better — and how to just draw people to Dyersville and give them a great experience,” Thompson says.

She says there is one big concern still out there as they make plans for next year. She says they have to keep a watch on the COVID situation as they can’t predict that, but can plan on what they anticipate and go from there. The second Field of Dreams game is set for August 11th. There are other events going on in Dyersville and at the Field of Dreams throughout the year. You can find out more about those at the Dyersville Chamber of Commerce website.