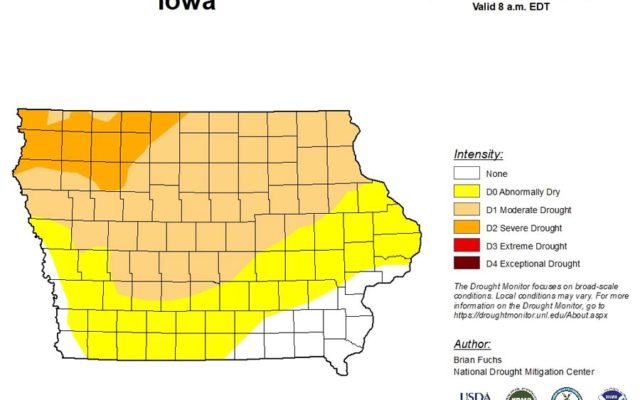 DES MOINES — The new US Drought Monitor map shows 90 percent of Iowa is experiencing some type of dryness or drought.

The Iowa Department of Natural Resources’ Tim Hall says only one section of the state has not water worries. “Southeastern Iowa way down in the corner — they’re not showing any dryness or drought — but virtually the rest of the state is,” Hall says.

The area of concern in northwest Iowa has grown a little bit. So, certainly the conditions are not trending in the direction we’d like to see them.  The map shows 32 percent of the state rated as abnormally dry, 47 percent rated as in moderate drought and 10 percent rated as severe drought. Hall says streamflow conditions across approximately half of the state are now classified as “below normal.”  He says the dry conditions in the north are now impacting things downstream. “As that lack of runoff works its way down through the system, we are seeing that reflected in the watersheds that run through central Iowa,” according to Hall.  “So even though we may not be a dry here as in some parts of the state. The parts that feed those river systems have been exceptionally dry, so  we are starting to see very low stream levels in parts of the state.”

Hall says the dry weather is worse this year because there wasn’t much moisture in the reserve. “Last year we entered  2000, we entered  the growing season with a significant supply of groundwater and soil moisture leftover from 2018 and ’19, which were really wet years. He says. “This year — 2021 — we came into  the year with almost no excess soil moisture and groundwater.  So, it’s as if we started with an empty tank.”

Hall says the weather data for June, July and August show there is a chance to run things around. “Over that three-month period statewide we average right at about an inch per week of rainfall. And that’s a pretty hefty chunk of moisture,” Hall says. “If we were able to get normal rainfall for the next three months — I think we would be in pretty good shape. The challenge is, every week that goes by without rain puts us another inch behind.”

He says you always have to wait and see with the weather. “We’re not panicking yet. But we’d really like to see some rain here in the month of June to start to replenish some of the soil moisture and start to get us back on track,” Hall says.

Some cities are asking residents to be smart about their water use as the dry conditions continue. Hall says those measures may be ramped up more if the lack of rainfall continues.