Drought expected to continue into spring 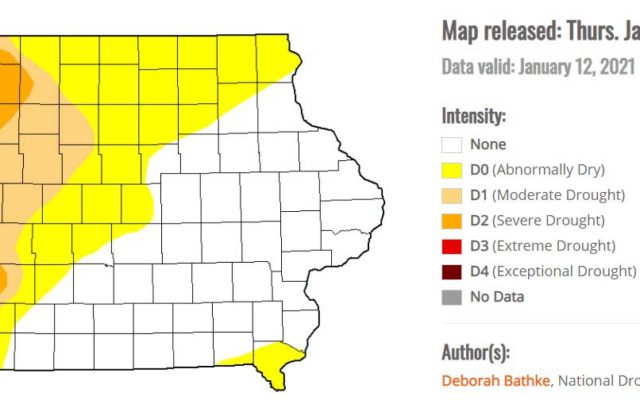 AMES — Much of western Iowa was in drought last year and even with a couple of heavy snowstorms already this winter, the drought is expected to continue at least into spring.

Dennis Todey, director of the U.S. Department of Agriculture’s Midwest Climate Hub in Ames, says it’s unlikely things will change soon. Todey says, “While a big snowstorm can provide melt-off and provide surface water, which is a positive, our soils are mainly frozen now so we need to get thawing soils before we can get any kind of precipitation into those soils.”

Todey says scientists are most concerned about the western third to western half of Iowa because the soils are the driest there.
“I would expect it to improve some in the spring,” Todey says. “Will it go away? I have a hard time thinking it’ll go completely away.”

The U.S. Drought Monitor report released this past week shows western Iowa in a moderate to extreme drought. Since 2018 and 2019 were very wet years for Iowa, the Iowa DNR’s Tim Hall says that probably helped get western Iowa through last year’s “harsh, dry conditions.”

“I think we didn’t see as significant an impact because of the wetness coming out of the two years leading into this one,” Hall says. Their comments were part of a drought webinar held by the Iowa Department of Natural Resources and Iowa Department of Agriculture and Land Stewardship.