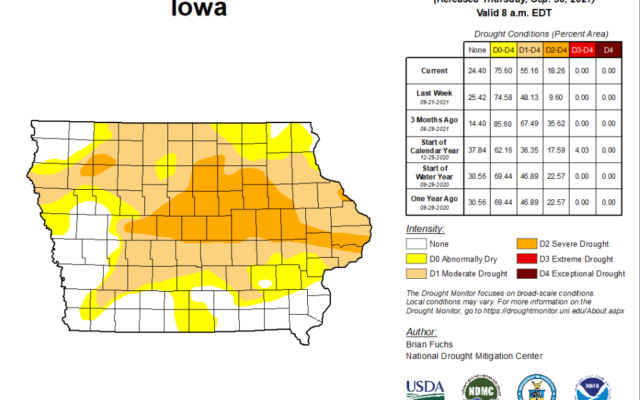 DES MOINES — The latest drought monitor reflects the lack of rain we’ve seen in the state in September.

The Department of Natural Resources’ Tim Hall some areas that were in D-1 moderate drought have now moved to the D-2 severe drought category. “About double the amount of the state that is currently in D-2, pulling some of the D-1 areas up into D-2. So, there’s a large area of dryness in east-central Iowa,” he says. Only about 24% of the state is reporting not drought conditions — down from about 25 % last week.

Hall says we shift at the end of September from the growing season — or “water year” concerns to the subsoil moisture concerns. “That’s primarily because most of what falls in the fall and into the winter is used in the next growing season — so we kind of start to add up numbers after October 1,” Hall says. “It becomes a question of where do we get positioned for the 2022 year.”

He says the need to bank moisture for next year varies across the state. “The deficits, depending on where you are — southeast Iowa ran a surplus for the water year — they are about an inch ahead for the year that ends in September. Central Iowa is the worst at ten inches deficit. Other parts of the state are finding from three to six inches behind for that 12-month period,” according to Hall.

Hall says one positive is the plants are not pulling water from the ground, and the cooler weather leads to less moisture lost from evaporation. “Demand goes down, we just would love to see some more moisture on the supply side to kind of build up those reserves and it’s just not there yet,” he says. He says there can be replenishing rains in October and November — but the odds
“As we exit the summer months — particularly July and August — the average amount of rain we get per month just continues to drop as the calendar year rolls out,” Hall says.

Halls says 2020 was also a dry year — so the state started out behind and hasn’t been able to fully replenish the groundwater through this year.

In north-central Iowa, areas of D-2 Severe Drought cover southern Cerro Gordo, far southwestern Floyd, all of Franklin and the majority of Butler County, with most of the rest of the listening area in the D-1 Moderate Drought category. (Click on map below to expand)