Drought conditions a little better but still cause concern 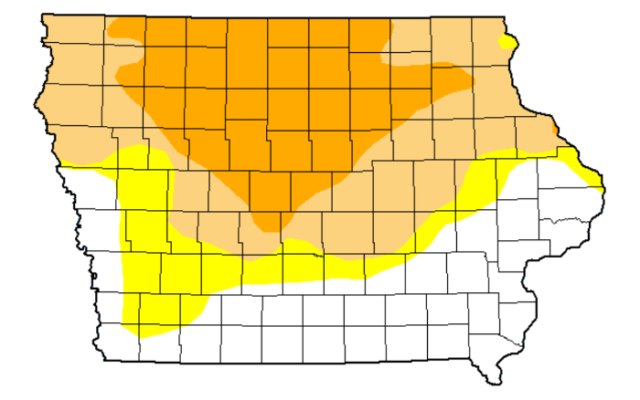 DES MOINES — Iowa’s dry conditions held about the same in the last week with around 70 percent of Iowa in some form of drought — and around 25 percent with severe drought conditions.

Department of Natural Resources hydrologist Tim Hall says the overall picture is still better than we had one month ago. “The numbers are better from this time in June until now. We’ve reduced the coverage of drought across the northern part of the state — so the rains have helped,” Hall says. ”

All of southeastern Iowa across the southern tier of counties is free from drought and dryness.” Hall says. He says the average stream flows across the state are around normal — which is a little misleading. “It’s really wet in southeastern Iowa. It’s kind of dry in north-central Iowa — so the average number belies the fact that there are areas of the state on either end of the extreme. Still the area that we are concerned about that were are trying to keep a careful watch on is north-central Iowa down through central Iowa through the Des Moines River and the Raccoon River.”

Hall says the long-term forecast is a concern. “So taking us through the end of July there’s very little rain in that forecast for most of the state of Iowa. So, dry conditions, not a lot of rainfall. We might expect to see a deterioration on the landscape that would be reflected in the drought monitor,” Hall says.

Hall says we are in a situation where things can flip in a real positive direction or go the other way in a real negative direction depending on how much rainfall does come. “We might expect to see some downgrading of parts of the state here in the next couple of weeks unless we get some rain,” according to Hall.

The new drought monitor will come out on Thursday.