‘Don’t let the woke left socialists get you down,’ Pompeo tells Iowa crowd 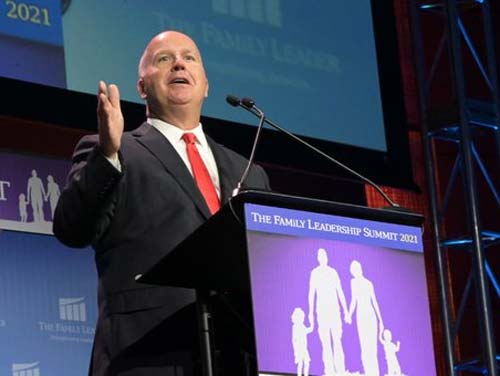 DES MOINES — Former Secretary of State and potential 2024 presidential candidate Mike Pompeo says Christian conservatives should never give an inch as they pursue their political goals.

Pompeo began by joking he’s an unemployed diplomat. “I’ll be honest with you, it has been tough to watch what is going on and what has gone on in these six months,” Pompeo said. “I wish that I was still there.”

While Pompeo touted the “America First” approach to foreign policy he pursed as President Trump’s chief foreign diplomat, Pompeo spent the vast majority of his speech discussing his faith and domestic issues.  “You all see the garbage they’re trying to teach in our schools today. It comes under various guises, often called critical race theory, but suffice it to say that it is a suggestion that somehow our nation is inherently and systemically racist,” Pompeo said. “This is a nation that has borne the costs and benefits associated with equality like no other nation in the world. We should be proud of it. We should not challenge our founding. It was noble.”

Pompeo says Christians are right to feel threatened and concerned about what they’re seeing in the culture and the government.  “I will tell you as we stare at the problem sets that we all are aware of teoday, we see in our homes, on television, that the breakdown of the American family is at the core of most of them,” Pompeo said. “It’s why the left wants to undermine the family unit upon which this nation was built.”

Pompeo addressed over a crowd of 12-hundred on Friday at The Family Leader’s summit in Des Moines.