Don Everly of famed Everly Brothers has died at age 84 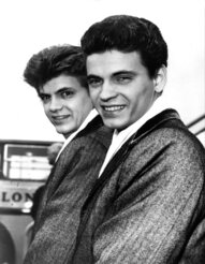 FILE - In this April 1, 1960 file photo, Phil, left, and Don of the Everly Brothers arrive at London Airport from New York to begin their European tour. Don Everly, one-half of the pioneering rock ‘n’ roll Everly Brothers whose harmonizing country rock hits impacted a generation of rock music, has died. He was 84. A family spokesperson said Everly died at his home in Nashville, Tennessee on Saturday, Aug. 21, 2021. (AP Photo, File)

SHENANDOAH — Don Everly — who lived in Shenandoah as a child and became part of the influential Everly Brothers — has died at the age of 84.

Don Everly was born in Kentucky in 1937. The Everly family moved to Shenandoah in 1945 to perform on the radio and their Shenandoah home has been turned into a museum. The Everly Brothers set out on their own in 1956. Their first hit was “Bye Bye Love in 1957. That was followed by a number one hit — “Wake Up, Little Suzie” — in the same year. Rolling Stone has called the Everly Brothers the most important duo in rock history.

Paul McCartney wrote the Everly Brother’s 1984 hit “On the Wings of a Nightingale” and Paul Simon featured their harmony on his 1986 “Graceland” album. Don Everly’s younger brother, Phil, died in California in 2014.