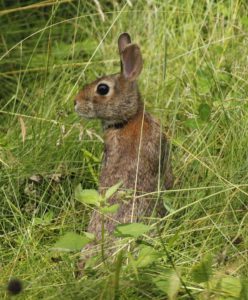 DES MOINES — A disease that quickly kills domestic and wild rabbits is confirmed in two states that border Iowa and state DNR officials are asking Iowans to be vigilant for signs it’s arrived here.

“What we’re asking for is unusual reports of dead rabbits,” Ruden says, “so, rabbits that might seemingly look in good condition but are dead and in someone’s yard or at someone’s farm.” If you spot one or several dead rabbits, don’t touch them — but instead reach out to Ruden’s office through email or the phone number below.

“Domestic rabbits are also very susceptible to this disease, so contact us and we’ll take care of getting that carcus, limiting exposure beyond that area and taking the precautions necessary,” Ruden says, “and then we’ll screen those animals and figure out if there’s something that elevates the concern of testing for rabbit hemorrhagic disease.”

Hunters are out in Iowa’s forests and fields now, looking for rabbits, as the cottontail season runs September through February. This disease shouldn’t be a worry for hunters as it proves fatal to rabbits swiftly.

“Following infection, there’s a rapid deterioration and we’d expect death within maybe 24 or 36 hours,” Ruden says. “It’s unlikely that a hunter would encounter an animal that was in the process of dying and happen to harvest that animal, but even if they did, this is not a disease of concern that people could actually get, it’s just the rabbits.”

The initial outbreak was in New Mexico in March of 2020 and the virus has since moved across the Southwest, Mountain and Great Plains states. Ruden says it can be spread from rabbit to rabbit, by predators, insects, and even by vehicle traffic. She says keeping the virus on Iowans’ radar is key to minimizing its impact should it show up here.