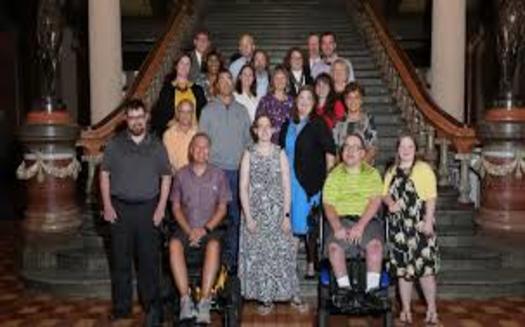 The Iowa Developmental Disabilities Council hopes their causes will not be ignored during the current legislative session. (Iowaddcouncil.org.)

DES MOINES, Iowa – Iowa lawmakers have been in session for nearly two weeks, and advocates for people with disabilities hope they don’t overlook their concerns as the legislative calendar moves forward.

Expanding community-based care supports is one of the top priorities for advocates. Brooke Lovelace, executive director of the Iowa Developmental Disabilities Council, says lawmakers could help people with disabilities in many ways.

“Adequate funding for the Medicaid program,” says Lovelace. “Funding to make sure the children’s mental health system has adequate funding.”

Lovelace says providing funding to eliminate the waiting list for services is a top priority as well.

Many of these issues were discussed during last year’s session, but were left unresolved. Lovelace says she’s unsure yet whether they will gain any traction this session, either.

Despite the uncertainty, Lovelace says they still need to keep sounding the alarm bell and not go silent.

“I think we have to keep educating our legislators so that they know that there are still gaps in there,” says Lovelace.

Lovelace says another way lawmakers can help is to ensure that direct-care workers receive higher wages.

There are more than 365,000 Iowans living with a disability.