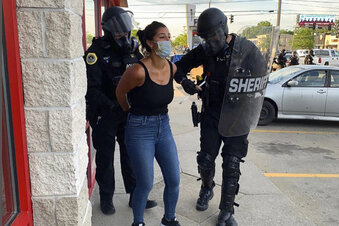 Police officers are shown arresting Des Moines Register reporter Andrea Sahouri after a Black Lives Matter protest she was covering on May 31, 2020, in Des Moines, Iowa, was dispersed by tear gas. Sahouri is set to stand trial on Monday, March 8, 2021, on misdemeanor charges, a case that prosecutors have pursued despite international condemnation from advocates for press freedom. (Photo courtesy Katie Akin via AP)

DES MOINES, Iowa (AP) — An Iowa journalist faces trial on charges stemming from her coverage of a protest against racial injustice.

Prosecutors have pursued the misdemeanor case against Des Moines Register reporter Andrea Sahouri despite international condemnation from free press advocates who say she was just doing her job.

Sahouri was pepper sprayed and arrested by a Des Moines police officer while reporting on a clash between protesters and police outside a shopping mall.

The two-day trial at Drake University will highlight an aggressive legal response by Iowa authorities against those who organized and attended protests that erupted last summer and occasionally turned violent.

Sahouri and her former boyfriend are charged with failure to disperse and interference with official acts.