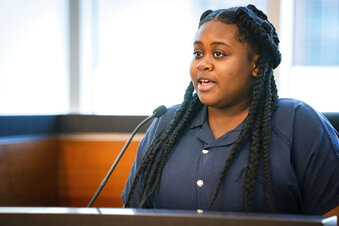 DES MOINES — A teenage girl from Des Moines has been sentenced to five years of probation and deferred judgment for killing a 37-year-old man who allegedly raped her multiple times.

Pieper Lewis was 15 when she fatally stabbed Zachary Brooks after she says he assaulted her again. She pleaded guilty to voluntary manslaughter and willful injury.

Lewis is now 17, and addressed the court Tuesday and said she is accountable for what happened, but that it came out of betrayal and trauma. “I repeat, I wish the events that took place on June 1, 2020 never occurred. But to say there’s only one victim in this case is absurd,” Lewis says.

Because Lewis was convicted of a felony she was also ordered to pay $150,000 in restitution to Brooks’ family. Her attorney protested forcing her to pay the family of her alleged rapist, but Judge David Porter said state law makes no exceptions.