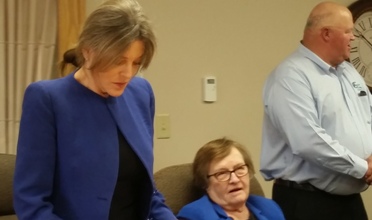 Williamson says the United States has become a country where the government does more to advocate for the economic benefit of just a few people as opposed to the larger good of opportunity for all.  “We have a government that has become little more than a system of legalized bribery that does more to advocate for short-term corporate profits for huge multinational corporate conglomerates than to advocate for the people and the planet. I think it’s time for the people to step in we need a serious and fundamental pattern disruption of the economic and political realities that have made all that happen.”

“Drain the Swamp” was a key phase of Donald Trump’s campaign for the White House in referring to trying to fix problems in the federal government. Williamson says that’s not a phrase she likes to use in describing those problems.  “It’s a childish, and an immature, and a superficial phrase for a very real phenomenon. It’s not a swamp, it is an ocean of corruption. It is not just a few swamp creatures. It is an entire unholy alliance between certain economic interests and our government and this has been going on for 40 years.”

Williamson says making things right in Washington is more than just getting rid of a few swamp creatures. “The American people were right in this last presidential election both on zhe left with Bernie Sanders and on the right with Donald Trump. People knew the system had become rigged against them, and about that they were right. Unfortunately I don’t believe that they got the positive change agent. I think they got the…and I’m afraid I’m sorry to say it, I don’t mean to be disrespectful…but I think he’s the biggest swamp creature of all. He is a change agent in the worst kind of direction, but I believe that the basic desire for change still exist, and some of those problems were pre-dated Donald Trump.”

Williamson believes the country is experiencing a huge culture shift with more people looking to rural areas to settle and raise their family.   “The baby boomers’ children have grown up now and they’re aging out of party time. They’re now getting married, having children, wanting places (asking), “where can I find a safe school, where can I find a place…as I was saying earlier, having some kind of longing for Andy Griffith now. There’s so much potential here, it’s kind of a crown jewel, but I understand that in these rural communities, they have got to have the good schools, the good hospitals, the good doctors, the good local infrastructures in order to attract people, so ethanol is an example.”

Williamson visited Golden Grain Energy to hear about the evolution of ethanol production from not only company officials but as well from former Iowa Lt. Governor and Secretary of Agriculture Patty Judge.

It’s not the first time Williamson has run for office. She unsuccessfully ran in 2014 for a California congressional seat.