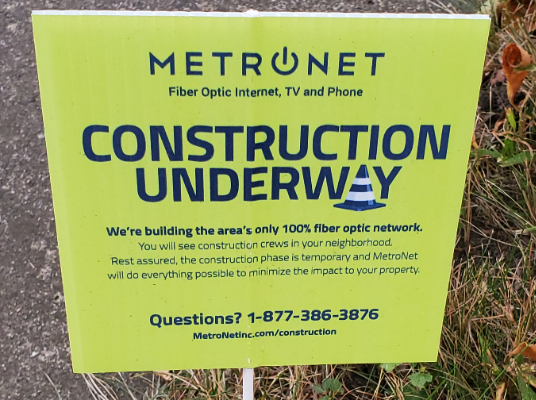 MASON CITY — The buildout of a high-speed fiber optic network continues in Mason City. The City Council last year approved an agreement with MetroNet in constructing the network that would provide internet, television and phone service to most of the community.

Mayor Bill Schickel says some residents are already online in the community.  “650 homes in Mason City have access so far. The project is about 15% complete.”

Schickel says MetroNet is behind their originally-intended schedule due to some construction challenges.   “Quite frankly, the project is taking longer than anticipated because what they’ve run into is the geology. The geology of our area in putting a lot of these cables underground is a lot of rock in this area. We know that with the cement plants and the mining of the limestone that this is an area where it’s difficult to bury cables underground. So that’s one of the things that has slowed things down.”

Schickel says MetroNet is trying to warn people several times in advance of coming to your area and installing the cable.  “When they are coming into your neighborhood, they send a letter four-to-six weeks out. Two-to-three weeks out, they’ll drop a postcard, and then they have yard signs that they put out about 10 days before the work is underway. They asked me to pass along that the work is temporary. It will be done, and they will make every effort to return everything back to pristine condition after they’ve completed their work.”

Schickel says MetroNet is currently not working in Mason City as they complete a project in another community, but he says they will be back in town soon to resume work.

Schickel made his comments on the “Ask the Mayor” program on AM-1300 KGLO earlier today. Head to the audio player below to listen back to the show. Click at this link to find out more information about the MetroNet network construction.