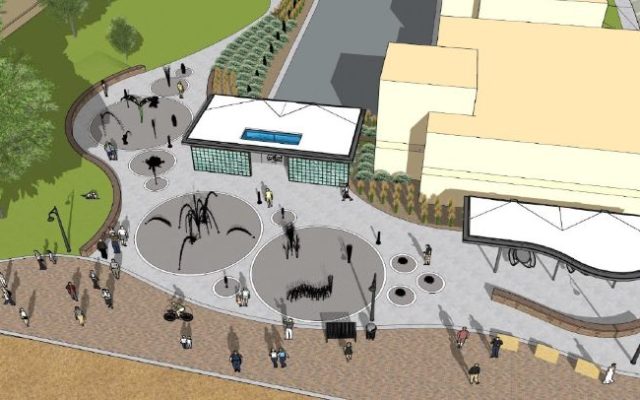 CLEAR LAKE — The Clear Lake City Council this week set the date for a public hearing on the second phase of the City Beach Enhancement Project. The project, estimated at $1.2 million, features the construction of a splash pad, a new restroom facility, a sun shade shelter area, as well as landscaping and lighting improvements.

Jason Blome of RDG Planning & Design says the new splash pad would have three different zones, with one zone being more geared to toddlers.  “It has a variety of play opportunities with a foaming geyser-gusher, kind of smaller jets that aren’t quite as intimidating for the smaller kids. They can sit down and really get integrated into those splash pad features. There’s also vertical features in this particular zone for the young kids. We’ve got a fish, a frog, a really large leaf component, and a little waterfall-volcano type element in that area.”

Blome says the other two zones will also incorporate lighting into the splash pad.  “A lot of the components in zone two and three also have LED lighting, so at night those features would be lit up. One of the strategic reasons for these locations is they are right along the beach in the walkway, and they’re kind of a nice forefront to the restroom building that will have some art features incorporated onto the facade of that building as well. Also in the fringes of these areas are some smaller bubblers for the young kids as well.”

Blome says the sun shade shelter will be a nice added feature for adults watching their children enjoy the splash pad.  “Another architectural component to the site is the shade canopy that is located directly to and parallel with the water treatment plant. It provides shade respite for the parents, good for flexible type use, adjacent to the splash pad area.”

Councilman Mike Callanan was part of a committee of councilmen, city staff and community organizations that’s been working with RDG on the project. He says the plan has exceeded his expectations of improving the area.  “From a personal standpoint, it’s got the wow factor, and I think the locals, as well as people visiting our beautiful community, are going to find it as a very wonderful thing for the city of Clear Lake.”

The public hearing and award of contract for the second phase of the City Beach improvements will be held at the council’s January 6th meeting.