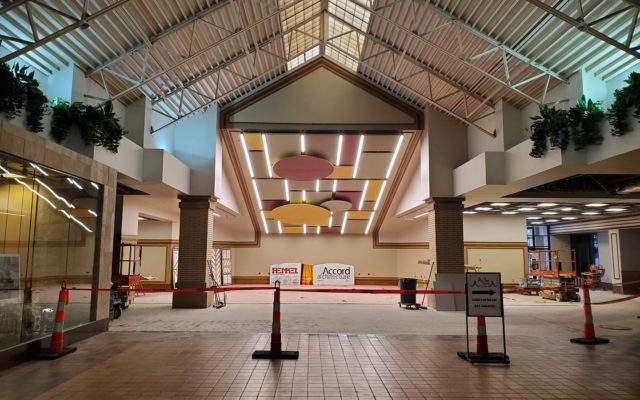 The indoor portion of the Principal Pavilion during construction on July 30, 2021

== The council approved the contract and bond for a utilities project for the Hyatt Place Hotel construction site. Storm sewer lines need to be rerouted around the hotel location prior to the city being ready to close with the developer on the site. The city accepted the low bid from Charlson Excavating of Clear Lake at $156,678 at its last council meeting and last night approved the contract and bond for the work.

== The council last night also approved change orders for the Principal Pavilion prior to its opening next month. The change orders were required to address existing conditions on the building connected to the pavilion and to improve the functionality of the facility. They include window replacements, a projection screen, an audio-visual cabinet, remediating the exterior of the Bagley Beck building, and added steel overhangs.

City Administrator Aaron Burnett says when the exterior of the mall was demolished, it exposed more of the existing buildings that wasn’t seen prior to that.  “It’s not to say that could not have been discovered. The thing that is difficult is to know how much you would actually see of those buildings without actually standing in the place where the building used to be is really hard to see. One could have imagined that those areas would have been exposed to the state that they were.”

Burnett says many windows in the surrounding buildings need to be replaced.  “Some of the windows were literally broken with glass hanging out of them and it was a safety concern. It was dangerous to even leave them there for the length of time that they were there, but it was behind construction fencing.”

Burnett says a projection screen to be installed in the indoor portion of he pavilion was not in the original plan but adds to the functionality of the space.  “I wish we would have put the projection screen originally in, but I think from a functionality standpoint, you look at the use of space like that, not having a projection screen makes it not as useful for the various uses that you would have in that space — you know, kids functions, movie watches, all sorts of different things that you can envision in the inside of that space — really having that screen will make it more functional.”

The total cost for the change orders is just under $33,900, with the changes being within the overall budgeted cost of the project.