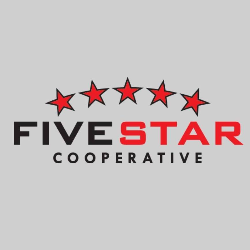 MASON CITY — The Cerro Gordo County Board of Supervisors today approved establishing an urban revitalization area and plan for just under 17 acres of land about a half-mile north of Ventura for a new cooperative facility.

Five Star Coop plans to transfer much of its Ventura facilities to this site over time as the current facility does not present a good opportunity for future expansion. The initial project will include one dry grain bin 105 feet in diameter and 125 feet tall, one wet grain bin 60 feet in diameter and also 125 feet tall, a 160-foot grain leg and tower, a corn dryer and truck scale.

The plan allows for the county to offer incentives for the project, which Five Star officials say the first phase will be an $8 million investment.

Supervisors chairman Casey Callanan says, “We were approached by Visit Mason City to see if we would be supportive of them putting their name in the hat for RAGBRAI and see if we would authorize the board to support a letter to go to RAGBRAI.”

The 49th annual RAGBRAI bicycle ride across the state is scheduled for July 23rd through the 30th. Mason City was a Wednesday night stop during the events in 1985 and 2014.