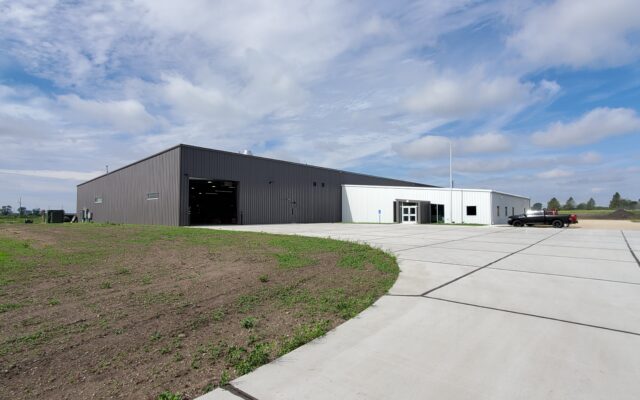 MASON CITY — Cerro Gordo County’s Engineering Department is in the process of moving into its new headquarters next to the Law Enforcement Center on Mason City’s west side.

County Engineer Brandon Billings says the building includes 11 bays for trucks, a new sign shop and several other amenities that the old building on Mason City’s south side did not have.  “One of the big advantages for the mechanics moving out of the south side of town is they can actually put lifts into the shop and lift trucks into the air, lift boxes while they are inside. That’s one thing they couldn’t do when they were there because the ceilings were too low in the building and it was just not financially feasible to put that much money into that shop for what we would need. When it comes to washing, we now have a wash bay, so in the winter time when there’s issues, they don’t have to stand outside and try to power wash something off in -20, they can be inside and actually get a good job done.”

Billings says it will help make his department more efficient by having many things under the same roof and a workforce that can help do multiple jobs.  “If our sign department needs help, we’ll have more people available. If other departments need help with a project, there’s a bigger pool of people to help. Even though a foreman has certain people assigned to them, that doesn’t mean it’s the only people he can use. The entire county crew is one crew, so if there’s people available, they’ll go out and do the work.”

Billings says the new building is part of a master plan that closed some World War II-era buildings around the county and constructing some smaller satellite locations for his department.  “When it comes to Clear Lake moving them over here, the shop there was an electrical nightmare. There were so many shortfalls with that. The roof was leaking, the plumbing was bad. It was just a maintenance nightmare, it wasn’t worth the money it would take to build it back up. That was one of the things I did when I came here is assessed all the buildings for the board and come to a plan with them as to what things need to be done and what things can be held off.”

Billings says there will be a new, smaller facility constructed in Ventura that will service both the South Shore and northwest corner of the county.  “We’re going to have a grader, a loader and two trucks out of there. It will greatly improve our ability to react in the winter time, and help the highest traffic volumes we have in the county get to the places they are going, get to the interstate, get to the bypasses and the other highways. It’s not just a convenience thing, it’s not because I want another new building, it’s because we can service the public and the county much better having a shop in that location.”