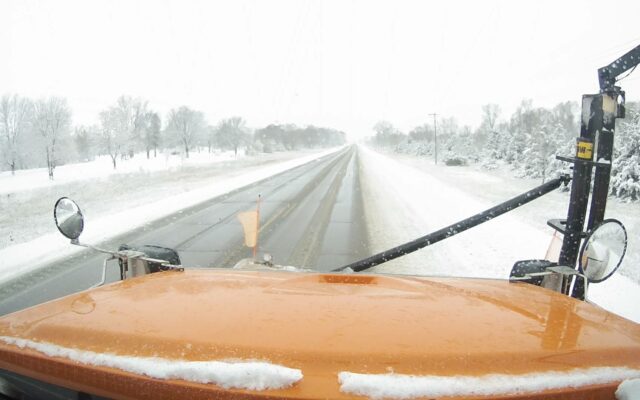 An Iowa Department of Transportation snowplow cam picture shortly after 10:00 AM on Friday December 9th 2022 just south of Manly on US Highway 65

County Engineer Brandon Billings says there is a plan in place for the department’s initial response as they’ll try to maintain the roads as best as possible through the weekend and then get out on Monday to take care of the majority of the cleanup to start the week.  “We plan to plow on Thursday, when the wind comes up throughout the day and early evening, as long as the weather allows us to see, we’ll keep plowing to get people home. On Friday, the weather looks pretty dramatic. We’re still going to try to get out there as long as we can see to clear the roads, we’ll get out there and make some rounds and make sure people can get around. The plan on Saturday is to go out there in the morning and assess it and see if the wind has calmed down, or see what it looks like. We’ll plow hopefully in the morning and afternoon on Saturday as well.”

Billings says they’ll try to keep the plows out if it can be done in a safe manner.  “We’ll be out there as much as we possibly can. If the DOT ends up pulling plows, it’s probably going to be the same time we pull them. I’ll be talking with Pete Hjelmstad about what the DOT is doing to try and make sure we’re going to stick out there as long as they are if possible.”

Billings says his department will try its best to maintain the roads on Christmas Eve to allow people to travel to family gatherings.  “The only thing we’re uncertain about that day is when the wind will start coming down. It’s supposed to about sunrise start dropping back from the sustained 30 down to towards a sustained 20 by the end of the day. It will just be us chasing drifts and figuring out where exactly we can make progress.”

Billings says if the plows aren’t making sustained progress on clearing the roads, they will be pulled off.  “If there’s no progress to be made, we’ll generally make a round or two and we’ll just pull them, because if we can’t keep it back, there’s really no benefit to us staying out there. If we can knock stuff back, or if there’s a big drift and we can put a hole in it so people can get through, even if it starts building back in, we’ll keep going through there to keep it open so people can get through. The only time we really stop is if we’re making absolutely no progress and we can’t see, so we pull them for safety.”

Billings made his comments during today’s meeting of the Cerro Gordo County Board of Supervisors.