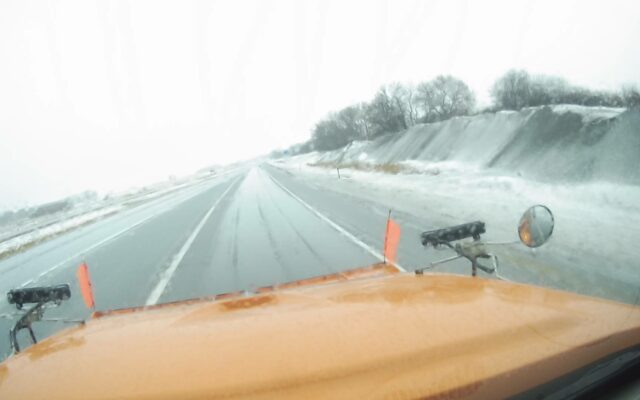 DOT snowplow cam image taken on Interstate 35 between Clear Lake and State Highway 9 shortly before 11:0 AM on January 3, 2023

MASON CITY — Cerro Gordo County road maintenance crews have been out and about even during this morning’s rain and mixed precipitation.

County Engineer Brandon Billings says with the combination of types of precipitation, it’s made it challenging in treating the roads.  “Today they’re out there sanding at intersections, stop signs, curves to try and keep the roads from icing up. The problem is with the rain, the salt is not effective unless there’s just ice out there, but the sand does help give some grip in those areas. We’re still out there treating it, hoping that we can assist in limited accidents on the roads, but it’s only going to be moderately effective until it stops raining.”

Billings says the county’s gravel roads by far are the toughest part of the system.  “We do have graders out there with ice blades on trying to roughen up the slick areas. We’re not going to put salt out there, because that will just turn those roads into giant messes, but we will put sand on them if it becomes necessary. We’re hoping that just roughening them up with the ice blades will give enough grip for people to be able to stay on the roads.”

Billings made his comments this morning at the Cerro Gordo County Board of Supervisors meeting.