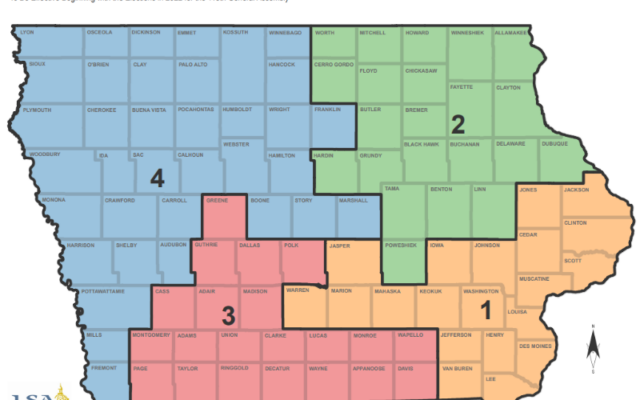 DES MOINES — The Iowa legislature has overwhelmingly approved the second plan for reconfiguring the boundaries for Iowa’s congressional and legislative districts.

Redistricting happens once a decade, after population changes are identified in the Census. Senate Republicans rejected the first redistricting plan October 5, but Republicans say the non-partisan Legislative Services Agency developed a second plan that had more compact districts and districts that were closer to equal in population.

“Now that the map has passed, we’re really six to eight months behind in the typical cycle,” Whitver told Radio Iowa, “and both sides, both parties are going to have to work really hard to get caught up and find recruits.”

Senator Pam Jochum of Dubuque, a Democrat, said redistricting has an immense impact. “It influences who wins elections, who is at the table when laws are considered,” she said during Senate debate, “and what laws actually pass.”

Early Thursday evening, the plan passed the House on a 93-2 vote. House Minority Leader Jennifer Konfrst, a Democrat from Windsor Height, said Democrats were ready to approve the maps, “sight unseen,” because they were drawn by a non-partisan agency and without consideration for where incumbents live.

Representative Bobby Kaufmann. a Republican from Wilton, blasted other Democrats who accused the GOP of intending to draft a redistricting plan to favor Republican candidates.

“I have seen countless Tweets and Facebook posts and delusions,” Kaufmann said. “…I want to make it crystal clear: Republicans were never going to gerrymander.”

Neither the House nor the Senate spent long debating the plan and Governor Kim Reynolds has indicated she’ll quickly sign it into law. The legislators who opposed the bill were Senator Ken Rozenboom, a Republican from Oskaloosa. Representatives Jon Jacobsen, a Republican from Council Bluffs, and Tom Jeneary, a Republican from Le Mars, voted no in the House. All three live in districts with another Republican incumbent, setting up the possibility of G-O-P Primaries in 2022.