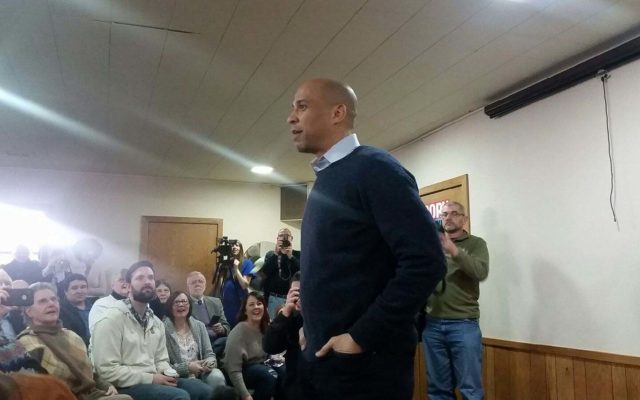 MASON CITY— New Jersey Democratic Senator Cory Booker kicked off a two-day White House campaign swing through Iowa talking to about 100 people gathered in the basement of the First Congregational Church in Mason City this morning.

Booker says Democrats cannot achieve their goals by demeaning or degrading Republicans.  “They’re our neighbors, they’re our friends. We may disagree with them but we have to find common ground. I want to win the White House back, but it’s not to beat Republicans, it’s to unite Americans. We have to make sure that in this election we define ourselves, and you don’t define yourself by bringing out the worst of who you are, you can’t campaign wrong and then think you are going to govern right.”

Booker says he wants to run for president in an attempt to unify the country.  “I’m standing here in Iowa today running for President of the United States because I worry that in this nation right now, there are people losing faith in us and our ability to solve our problems, deal with persistent injustices. People are feeling left out and left behind, and folks are feeling like a force is tearing us apart as a country, pitting us against each other, are stronger than the forces that are holding us together. I don’t believe that. My whole life is a story against that.”

Booker says he’s for a “healthcare for all” style plan that would ensure every American has a right to high, quality healthcare.  “If you don’t believe the system is broken, you need to wake up to the challenges we see. We are a nation that spends more on healthcare than any other country, with the worst results, and we still leave people out of the equation. We are a nation right now that often has a disease treatment system as opposed to focusing on well being, as opposed to early prevention, as opposed to folks doing early intervention.”

Booker was also traveling to Waterloo, Cedar Rapids and Iowa City today, and is scheduled to stop in Marshalltown and Des Moines tomorrow.

Listen to raw audio of his speech via the audio player below.