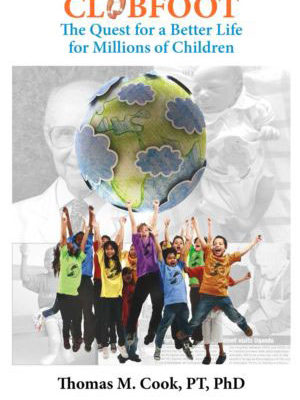 IOWA CITY — A University of Iowa doctor who developed a painless, non-surgical technique for curing the world’s most common skeletal birth defect is subject of a book being released today.

Doctor Ignacio Ponseti discovered that using plaster casts and braces could cure clubfoot, which strikes 200,000 newborns globally every year. U-I professor emeritus Tom Cook is the author of “Clubfoot: The Quest for a Better Life for Millions of Children.”

“It manifests itself as a foot that is severely pointed down and tilted inward,” Cook says. “It’s a more or less random genetic variation. There’s no real cause related to the mother’s nutrition or any of those sorts of things.” Ponseti died in 2009 at age 95.

A native of Spain, Ponseti moved to Iowa in 1941 and first started working on what became known as the Ponseti Method in the late 1940s. His technique didn’t become widely known until the 1990s and the advent of the internet, as parents searched for a nonsurgical cure for clubfoot. Cook says Ponseti’s technique was “revolutionary.”

“A surgeon can rearrange the bones in the foot, lengthen tendons and sever ligaments and make a foot look like a foot,” Cook says, “but the problem is, by the time these young children become adults, there’s been enough insult to the structures in the foot and ankle that they become very arthritic, very painful.” Ponseti’s noninclusive alternative to surgery can correct the crippling deformity. 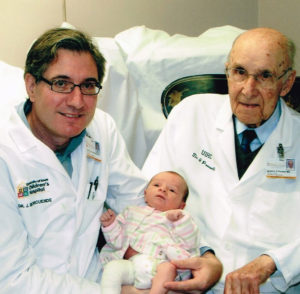 Dr. Jose Morcuende (left) and Dr.Ignacio Ponseti with a patient.

The U-I-based Ponseti International Association is working with medical professionals in training programs in at least 70 countries around the world. “You can imagine a week- or ten-day-old foot of an infant is a small, little thing and to be able to properly manipulate it and apply a cast in a very precise way to put the pressure where you need to put it is a skill that takes some time to develop,” Cook says.

The Iowa City area is home to the nonprofit organization Clubfoot Solutions and MD Orthopedics, which are the world’s largest producers and distributors of high-quality clubfoot braces. Cook, who first worked with Ponseti in 1992 at the U-I, says it was a “real pleasure” researching and writing this book about the man who has helped tens of thousands of children to walk normally.

“His life story before he got to Iowa is every bit as fascinating as the story of what he did once he got here,” Cook says. “He was in the Spanish Civil War, he was a refugee in France and Mexico, he did some amazing things before he even got here to do some amazing thing for the kids with clubfoot.”

Cook is a physical therapist, biomedical engineer and a global health specialist. He’s published many papers and written a textbook, but this is his first book for the general public. The book is published by Ice Cube Press, based in North Liberty.