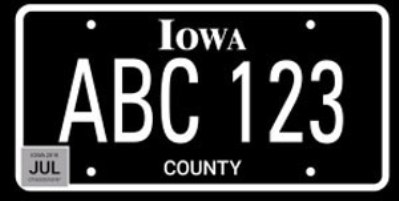 DES MOINES — Shoppers looking for that perfect buy for Christmas may already be sporting one of the hottest selling items of the year on their cars and trucks. The blackout license plates went on sale in July and were so popular the state began offering a non-personalized version.

Iowa DOT Vehicle Services Manager Daniel Yeh says they have been able to adjust the production run of the regular plates to meet the demand. “Depending on the demands and the numbers that are need — they’ll just keep the number series going through those plates. So, they might produce a thousand blackout plates with the number series and then switch over to county standard and just pick up that number series,” Yeh says.

The blackout plates become the top-selling specialty plate by mid-October. The blackout plates started when the standard number series that began with the letter I — and quickly moved through those letter combinations.  “We have had some fund ones come through. Obviously we had up to 999 plates that started with I-S-U. So, we probably had some Cyclone fans out there very happy about that,” according to Yeah.

The next series of plates will start with the letter J. He says they do occasionally have to make adjustments in the number sequence for specialized plate requests. “Every now and again — people will ask for personalized plates that actually take what would normally be a random sequence — so the computer knows to keep them out of the mix,” according to Yeh. “As I mention with those I-S-U plates, there are a lot of people in the past who might have just ordered as a personalized plate, something that had I-S-U and three numbers. But the computer knows not to print those as a random plate.”

Sales of the blackout plates topped 46,000 through mid October to pull ahead of the black and gold University of Iowa plates as the best selling specialty license plate.