Bill Northey, heading back to Iowa, reflects on U.S.D.A. tenure 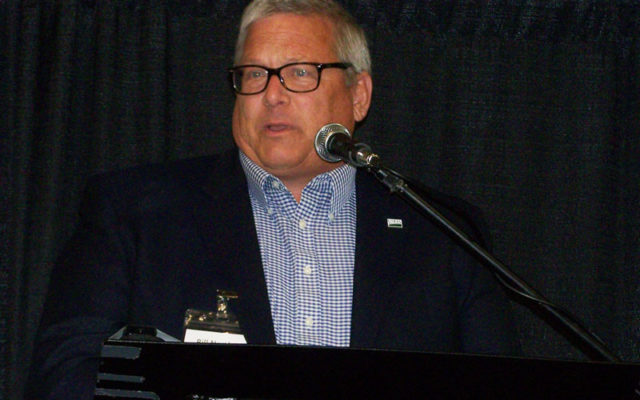 WASHINGTON — An Iowan who served nearly three years in the Trump Administration is heading home.

Bill Northey resigned as Iowa Ag Secretary in March of 2018 to become Under Secretary for Farm Production and Conservation in the U.S. Department of Agriculture.

“It’ll be different waking up now every day not thinking about all the things we need to do at U.S.D.A.,” Northey told Radio Iowa in an interview. “There’s other folks that’ll work on that. Now I can start thinking about what I might do next.”

Northey helped draft the agency’s rules for implementing the 2018 Farm Bill and he helped set up the payments to farmers impacted by trade disputes and the pandemic.

“Those were all in addition to the Farm Bill programs and the disaster programs that are there to respond in case of weather programs,” Northey said.

Northey oversaw a division of the U.S.D.A. with 21,000 employees, operating out of about 3,000 locations and Northey traveled extensively. He visited U.S.D.A. offices in Puerto Rico and the Virgin Islands as well as in 48 of the 50 states — he didn’t make it to Hawaii or Alaska. Northey said he got to see massive cattle ranches dealing with wildfires, blackberry farms and other types agriculture he wasn’t familiar with before.

“It was very interesting to realize the breadth of agriculture in this country,” Northey said.

The biggest surprise for Northey was the intensity of internal agency activity to implement and support U.S.D.A. programs. Northey cited the pandemic relief fund created by congress in March, 2020, with the U.S.D.A. beginning to send checks in May.

“It’s really nice to have somebody who knows how the place works and probably has had a little bit of time to think about what he might want to do the next time around, if there was a next time around,” Northey said, “so he’ll hit the ground running.”

Northey said he has no idea if his service in the Trump Administration will impact his future prospects.

“It’s kind of interesting in my time in Washington, D.C., sometimes I almost felt farther from politics than I did when I was secretary of ag in Iowa,” Northey said. “There I need to keep track of it when I was out and around. When I got out and around as Under Secretary of U.S.D.A., they just asked me about programs.”

Northey said he paid less attention to politics — and to Twitter — than he had during his 11 year tenure as state agriculture secretary and he had no comment on Trump’s actions on January 6.

“I’m probably not the best person to understand either the pieces that happened or the consequences of those,” Northey says. “We’ll see what time brings.”

Northey was in the U.S.D.A.’s D.C. office building on January 6 when rioters breached the U.S. Capitol. Northey said the building is at the opposite end of the National Mall from the Capitol and he never felt threatened.

Northey’s sister and brother-in-law took over his farming operation near Spirit Lake when Northey left for D.C. in 2018. Northey and his wife are moving back to a townhouse in the Des Moines area with a U-Haul this weekend. Northey told Radio Iowa he’s not ready to retire.

“Not ready to rock on a front porch some place,” Northey says. “Certainly interested in being able to do some other things and we’ll figure those out.”

Northey, who is 61, graduated from Iowa State University with an agri-business degree and earned an MBA from Southwest Minnesota State. Northey served as president of the National Corn Growers Association in the mid-1990s and won his first term as Iowa Secretary of Agriculture in 2006.