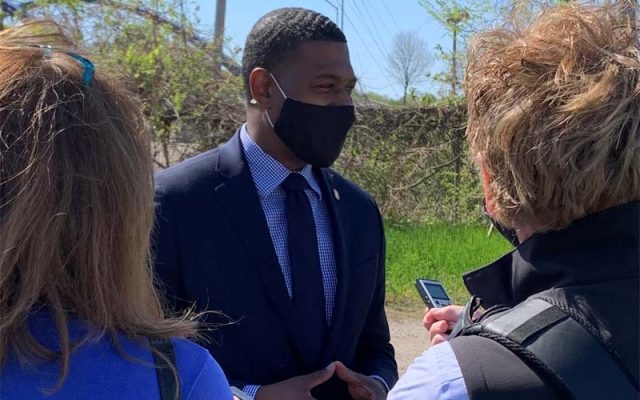 NEVADA — The administrator of the U.S. Environmental Protection Agency spent much of Tuesday in Iowa. It’s the first solo trip Administrator Michael Regan has taken since he was sworn into office.

Regan toured an ethanol plant in Nevada and he told reporters the EPA’s announcement on biofuels production levels is coming.

“It’s a priority and I’ll be honest with you, the last team left us in a little bit of a deficit. There were some decisions that were not made for 2019, 2020, and 2021,” Regan said. “We’re working on a strategy for how we can make up for lost time, but have integrity in the system so that when we come up with a product, we’re not legally vulnerable for skipping steps.”

The legal dispute over how the EPA previously awarded ethanol blending waivers to the oil industry has reached the U.S. Supreme Court. The EPA, which Regan has led since March 11, just rescinded three ethanol waivers granted on President Trump’s last day in office.

“People will criticize EPA for not going fast enough, but I can assure you this administration is going as fast as we can, utilitizing the science,” Regan said. “And, by the way, we want to do it as quickly as possible because this industry deserves some certainty.”

Regan also met privately with a group of Iowa farmers about the role agriculture can plan in a national effort to reduce carbon emissions.

“It was a very optimistic conversation about what farmers are doing,” Regan said, “and how technologically advanced, scientifically grounded the farming community is in terms of looking at carbon capture and sequestration, reducing their own greenhouse gas footprint.”

Farmers in the group told the EPA administrator about some of the projects that are part of the state’s voluntary strategy to reduce farm chemical run-off into Iowa waterways. Regan said what he heard about was “innovative” and “cutting edge,” but Regan told reporters he hasn’t examined the issue closely enough to determine whether the voluntary approach is working.

“What we’re trying to do is use the power of convening, get everyone to the table and let’s take a honest look at what has been working and what hasn’t been working,” Regan said. “I think we have to be honest about pushing forward on the things that are working and not to be afraid to discuss what’s not working and then we get to the point of discussing what has to happen through a regulatory versus a voluntary lens.”

Regan met with Governor Reynolds and visited a contaminated industrial site in Des Moines that the EPA will start cleaning up this year. Regan was North Carolina’s top environmental regulator before President Biden asked him to lead the EPA.