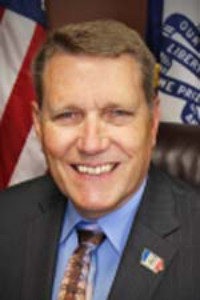 MARSHALLTOWN — A special audit of the Iowa Veteran’s Home says former commandant Timon Oujiri was relieved of his duties in early May due after receiving more than $100,000 in improper pay.

The report, released by State Auditor Rob Sand, shows the discrepancies that came to light when Department of Administrative Services employees reviewed the payroll of various agencies for accuracy back in April, in preparation to transfer to a new payroll system.

Payroll costs from July of 2019 through May of this year showed the number of improper payments and payroll costs at IVH. The report also includes suggestions to strengthen some of the internal controls at IVH, including a review of payroll journals by someone not associated with the payroll process.

Governor Kim Reynolds has not previously said why Oujiri was fired, saying it was  “due to job performance issues.” And  “the underlying issues were financial in nature.”

The report has been sent to the Iowa DCI, the Marshall and Polk counties Attorney’s Office, and the Attorney General’s office.