Another round of severe weather expected later today 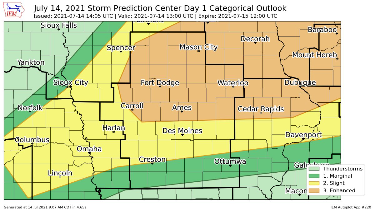 MASON CITY — Severe storms rolled through our area this morning and another round of weather is anticipated this afternoon, according to National Weather Service meteorologist Craig Cogil.

Despite the long-running drought, street flooding could become a threat with today’s downpours.  “The main flooding concerns are more in urban areas, not so much out in the countryside,” Cogil says. “Certainly, higher rainfall rates in urban areas can cause localized street flooding or maybe flash flooding but generally, out in the countryside, things have been dry enough so far this year that I don’t think it would cause any widespread issues.”

This past Friday, parts of western and central Iowa were battered by hail as large as baseballs. Cogil says the forecast should begin to calm down by early tomorrow. “It looks like the front is going to settle down into southern Iowa on Thursday,” Cogil says. “Still some thunderstorms across the southeast half of the state on Thursday, but it doesn’t look like any severe weather with that.”

High temperatures across Iowa today should be anywhere from the low 70s to around 90 degrees.