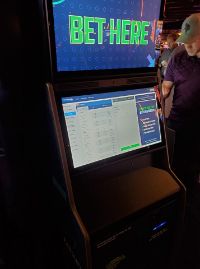 Racing and Gaming Administrator Brian Ohorilko says commissioners approved a license for the Casino Queen Marquette at their meeting last week. “Marquette has not selected a partner yet — however they are in negotiations with multiple companies,” Ohorilko says.

Sports gambling revenue increased again in October — which was the second full month for sports gambling.  “Part of that is because we’re seeing more operators go live,” Ohorilko says. “I think some of it also is because of the season that we are in. It’s a very popular season in regards to sports wagering.”

Sports betting began in mid-August and some casinos were ready to take sports bets that day — but others have been — or are still ramping up. Ohorilko says more operators will continue to impact the amount of money bet on sports, and probably also impact on-site betting as well.  “I would expect that November numbers will also be strong. We are seeing some spillover into the casinos,” according to Ohorilko. “That number was very good in September and October. It did level off a little bit.”

He says sports bettors have to come in to sign up before starting to bet — but after that they don’t have to come in — and they’re that reflected in the betting. “Operators that have a mobile app — not necessarily mobile wagering — but the companies that have ap that folks can use on their mobile device, we’re seeing a greater proportion of wagers being placed on those devices,” Ohorilko says.

He says that could grow too as more casinos get their apps up and running. “That will be another thing that we continue to monitor and we’ll how much and what the impact of mobile wagering is,” Ohorilko says.

The Iowa Racing and Gaming Commission reports there was about $46.5 million bet on sports in October. That was up by just about $8 million compared to the first full month of sports betting in September.