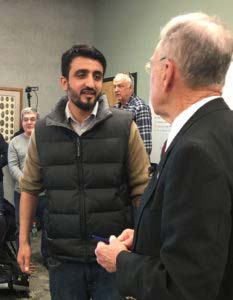 IOWA FALLS — A man who served as an interpreter for U.S. troops in Afghanistan is hoping to have better luck in immigration court after being denied political asylum in the United States.

Zalmay Niazy has lived in Iowa Falls since 2015. He has an appointment with an immigration judge in Omaha late this month.

“I am crossing fingers,” he said during an appearance on Iowa Public Radio, “and I am very hopeful that it goes the right direction and I get to stay.”

The U.S. Department of Homeland Security cited involvement in a terrorist organization as the reason for denying him asylum and Niazy said that’s very frustrating since he worked with U.S. soldiers to fight against terrorism in Afghanistan. Niazy said his life will be in danger if he is deported back to Afghanistan and immigration court is his last hope.

“If I get a denial from the court, that will be a death sentence for me to go back home,” Niazy said.

Niazy’s case drew national attention in 2017 when he went to one of U.S. Senator Chuck Grassley’s town hall forums to ask for help. Niazy told Grassley he’d been shot twice and survived a roadside bombing during his work as an interpreter for U.S. troops in Afghanistan.

“I already have a stamp on me and my family as a US spy back there,” Niazy told Grassley in 2017. “I have lost my uncle and I have went through a lot of bad situation.”

Grassley told Niazy he would help and two months later Niazy was interviewed by immigration officials. Niazy didn’t hear again about his case until he received a letter this past January, informing him his asylum request was denied.