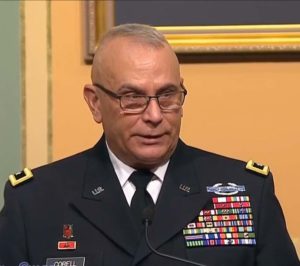 DES MOINES — Iowa National Guard Adjutant General Benjamin Corell says the soldiers in his ranks are “a wealth of talent” for the state not seen since World War II, but during the annual “Condition of the Guard” address Thursday at the Capitol, Corell said the Guard is going to lose some soldiers due to the Pentagon’s COVID vaccine mandate.

“Let me be clear: federal Covid-19 vaccine mandates will no doubt impact our organization,” he said during the speech. “These mandates have already started to create dilemmas within our ranks where our members must decide to get vaccinated or leave military service.”

Corell later told reporters for Radio Iowa and The Cedar Rapids Gazette that about 80% of the Iowa Army National Guard soldiers and Iowa Air National Guard airmen are fully vaccinated.

“There’s always an attrition rate of some type where people join and they don’t want to continue their membership,” Corell said, “so when we add an additional factor in there of having to remove people from service because they’re not vaccinated, I have a big concern about it as I look at the formation.”

Airmen in the Iowa Air Guard faced a December deadline to get vaccinated. The deadline for soldiers in the Iowa Army National Guard is this summer. Some of the unvaccinated are seeking medical or religious exemptions, which must be approved the secretaries of the Army or Air Force.

“We have men and women who have served for decades that have chosen: ‘I’m going to retire because this is something I don’t believe in,’ so I have concerns about that,” Corell said. “I can’t control it. It’s a legal order from the Secretary of Defense. I know that there are challenges that are being made throughout the legal system and through some of our political leadership, but I have to stand aside and watch and I have to do what I’ve been directed to do as a legal order from the Secretary of Defense at this point.”

Corell revealed in early 2021 that he had lingering COVID symptoms, so-called “long COVID” after being hospitalized for the virus in November of 2020. He was featured in a state public service announcement encouraging Iowans to get vaccinated.

“I think I’ve kicked the majority of the residual issues from it, but you know I had it bad and I haven’t been sick a day in my life other than having COVID,” Corell said. “Every day I keep appreciating what I’m able, but I don’t really have affects from the COVID left over at this point.”