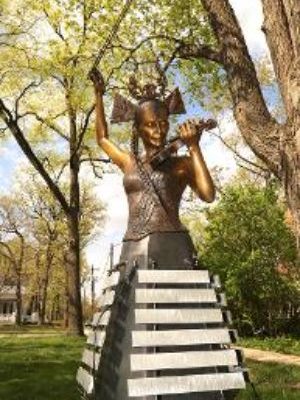 MASON CITY — The annual River City Sculptures on Parade “People’s Choice” and “Best in Show” winners were announced last night at the start of the City Council meeting in Mason City.

Sculptures on Parade president Robin Anderson says after over 500 ballots being cast, the “People’s Choice” winner was “Muse-Ic” by Sioux Falls-based artists Lee Leuning and Sherri Treeby.  “This is actually the third time that Leuning and Treeby have won the People’s Choice competition. They have two other pieces: “Summer Distractions” which is here at the library, the little girl on the scooter; and “Maestro”,  the one that’s in front of the Commerce Center that is interactive, are two previous People’s Choice winners.”

As part of an agreement with the city council, the city purchases the “People’s Choice” winner each year for permanent placement on the sculpture walk. Anderson says organizers hope with its music theme that the sculpture can be placed near the Performing Arts Pavilion that will soon be constructed on the north side of Southbridge Mall.  “So we’ve been working with the architects on that, and once we get the placement nailed down, that will go to the Planning and Zoning Commission and then to the council for final approval. We think having it there by the Performing Arts Pavilion and the fact that it’s interactive would be a good space for that.” 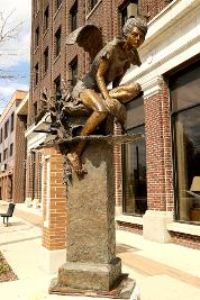 The “Best in Show” winner is “Lost in a Dream”, created by the late Jack Morford of American Fork Utah. Family members say when Morford lost his wife to cancer, he was so grief-stricken that he stopped creating sculptures for three years. He then had a dream that encouraged him to resume sculpting, with “Lost in a Dream” being his first work. Anderson says his family has offered to have the sculpture as a permanent part of the River City display if a purchaser can be found.   “His family has offered that if we can find a purchaser by March 1st, they would sell it for $17,500. Our committee is really hoping that we could find a purchaser and maybe site this in front of the cancer center and have it stay in Mason City.”

Sculptures in the current display that are not purchased will be taken down in April and returned to the artists or sent to other public art programs. A new exhibit of sculptures will be installed in early May.