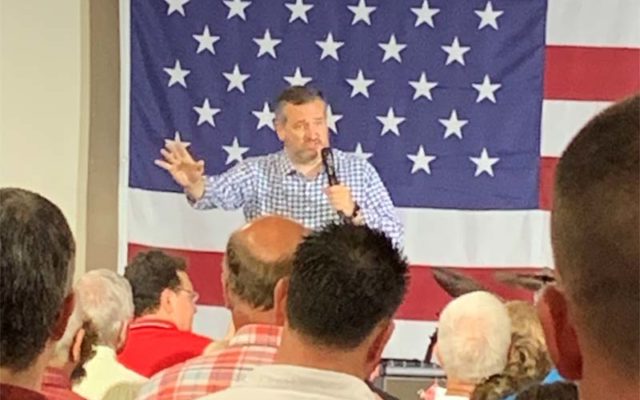 CEDAR RAPIDS — Texas Senator Ted Cruz, the winner of the 2016 Iowa Caucuses, says Iowa’s congressional races will help determine if Republican regain the majority in the U.S. House in 2022 and he headlined a fundraiser for Congresswoman Ashley Hinson of Marion this weekend.

Cruz said pandemic-related closures of businesses and schools were “madness” and he railed against the tax and spending plans Democrats have developed.

But his fiercest criticism was of President Biden’s decisions on Afghanistan. “The past two weeks have been incredibly painful for every American as we watch the catastrophe unfolding in Afghanistan….as we see Joe Biden afraid to stand up to terrorists,” Cruz said.

Cruz has also endorsed one of the GOP candidates running for the congressional seat currently held by Democrat Cindy Axne of West Des Moines.

About half the crowd listening to Cruz in Central City on Saturday stood for his entire speech. Cruz told them they were part of a tidal wave ticked off Americans. “The road to revival comes through Iowa and the road to bringing America comes through the great state of Iowa,” Cruz said, to cheers.

Cruz has said he enjoyed running for president in 2016 and he said during an interview with Newsmax he’s looking at running in 2024. Iowa G-O-P chairman Jeff Kaufmann says he has a strong feeling Cruz is “all in” on keeping Iowa’s Caucuses first in 2024, but Cruz didn’t bring the subject up or make a direct reference to his 2016 win here.